Adriatic LNG at the 2nd AIEE Symposium on energy security 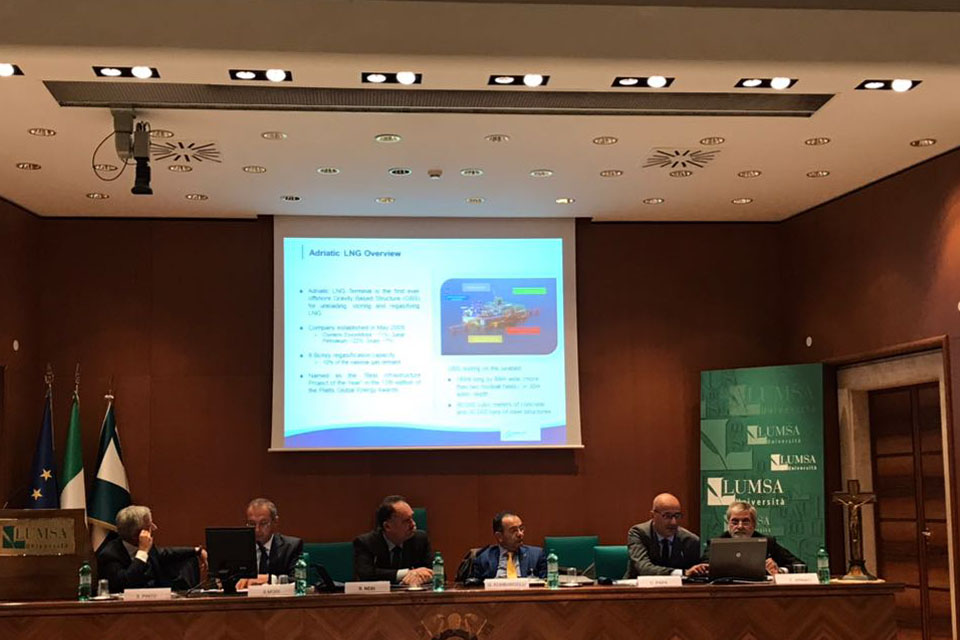 Rome, November 6, 2017 – The role of natural gas and in particular of liquefied natural gas (LNG) in the energy transition is the theme that Adriatic LNG presented at the 2nd International Symposium organized by the Italian Association of Energy Economists (AIEE), an edition devoted to current and future challenges in energy security, a topic of great relevance in the national and international energy agenda.

At the conference, held in Rome from November 2 to 4, Adriatic LNG's Commercial Manager, Corrado Papa has led the plenary session that brought together the managers of the leading companies and industry associations to analyze the instruments useful to favor a 'low-carbon economy, particularly in the industrial sector.

"In order to implement the energy transition, technological development shall be combined with safe, reliable and economically competitive forms of energy. Oil will remain the main source of energy in the world, but natural gas will grow more than any other source globally. Natural gas is in fact the cleanest fossil fuel, it is abundant and versatile and will be very much used both in electricity production and the industrial sector. Also Small Scale LNG - the development of projects and processes in which LNG leaves the plants in liquid form to ports for use in maritime, heavy transport and for use in the off-grid industry - will play an important role in this framework of emissions reduction”.

In the energy scenario described during the conference, the Adriatic LNG terminal can play a key role in energy supply for Italy and Europe: the first offshore Gravity Based Structure (GBS) for unloading, storing and regasifying LNG, the terminal offers an important contribution to ensure the diversification of import sources. By overcoming the need for pipeline linkage with production sites, the terminal has allowed Italy to increase its energy supply sources by importing LNG from Qatar, Egypt, Trinidad & Tobago, Equatorial Guinea, Norway and recently also from Nigeria and the United States.