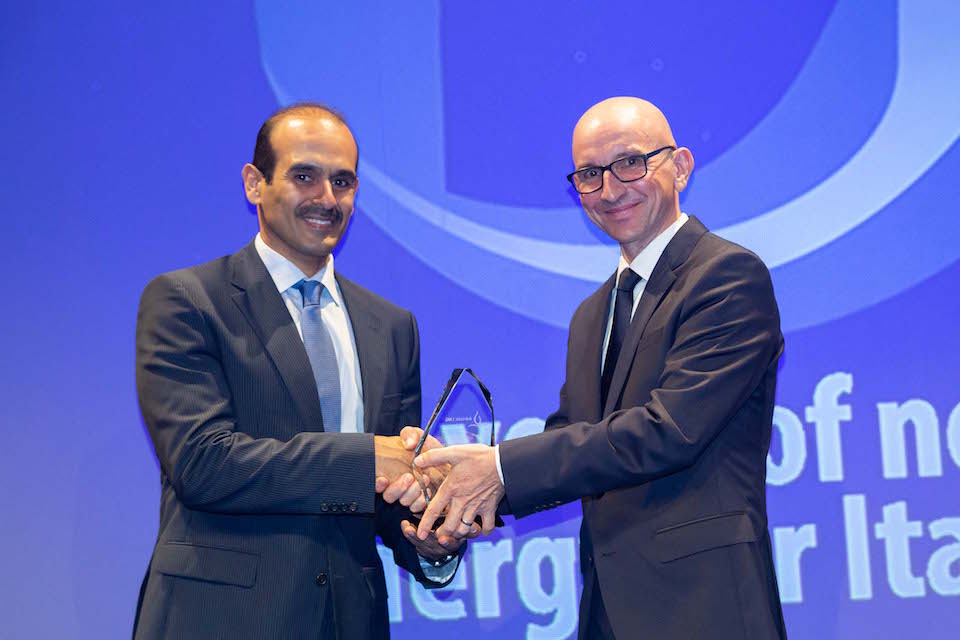 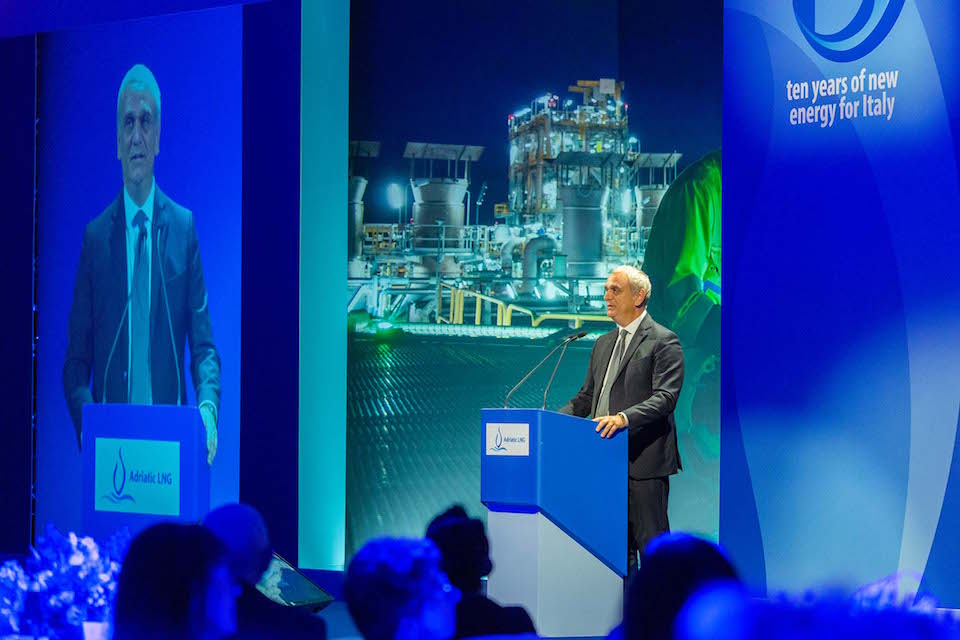 Stefano Saglia, Board Member of the Italian Regulatory Authority for Energy, Networks and Environment (ARERA) 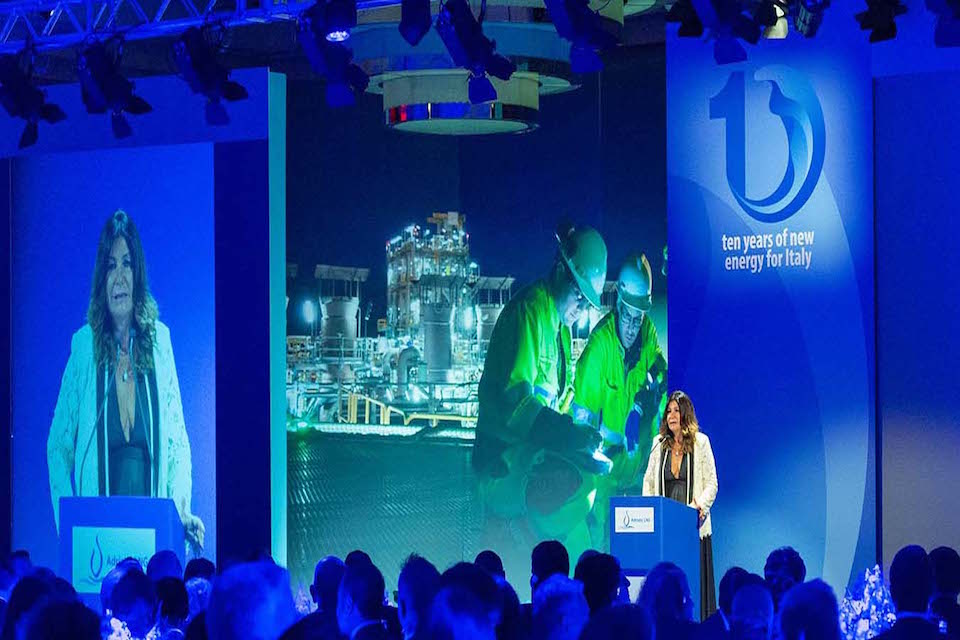 Venice, September 10, 2019 – Yesterday Adriatic LNG celebrated the 10th anniversary of the regasification activities of its terminal which is located off the Veneto coasts. The terminal is a strategic infrastructure for Italy, supplying 10% of national natural gas consumption and contributing to the energy transition towards more sustainable sources.

Since September 2009, over 700 carriers arrived at the offshore terminal and safely discharged LNG (Liquefied Natural Gas), which was then regasified and sent into the national pipeline network for a total of over 59 billion cubic meters.

Every day the Adriatic LNG terminal contributes to the energy transition towards more sustainable sources, being the fossil source with lowest emissions (up to -60% compared with coal). Abundant in nature, economical and reliable, natural gas is suited to meet peak demand and back up intermittent renewable sources, due to its flexibility and ease of storage.

Thanks to regasification technology, the Adriatic LNG terminal allows the import of Liquefied Natural Gas, overcoming pipelines’ physical limitations. Due to its high flexibility, Adriatic LNG has received LNG from eight countries, otherwise inaccessible: mainly from Qatar but also from Egypt, Trinidad and Tobago, Equatorial Guinea, Norway, Nigeria, USA and Angola. By expanding the number of import countries, the terminal significantly contributes to the diversification of supply sources, increasing the security of national energy system while reducing dependence on single suppliers.

The celebration ceremony was attended by many institutional representatives, as well as representatives of the international and Italian economic community, including Saad Sherida Al-Kaabi – Qatar Minister of State for Energy Affairs, President & CEO of Qatar Petroleum, Abdulaziz Ahmed Almalki Aljehni – Ambassador Plenipotentiary and Extraordinary of the State of Qatar to the Italian Republic, Elizabeth Lee Martinez – Consul General at United States Consulate General in Milan, Stefano Saglia - Board Member of the Italian Regulatory Authority for Energy, Networks and Environment (ARERA), Liliana Panei - Director of Natural Gas Market and Infrastructures division at the Italian Ministry of Economic Development. The event was also attended by many local institutional representatives, including Maddalena De Luca – Prefect of Rovigo, Ivan Dall’Ara – President of Rovigo Province, Simone Venturini – Councillor for Economic Development of the Municipality of Venice and Maura Veronese – Mayor of Porto Viro.

Saad Sherida Al-Kaabi, Minister of State for Energy Affairs, President & CEO of Qatar Petroleum stated: “The Adriatic LNG Terminal is a symbol of how countries can work together to ensure that people’s daily energy needs are met, that businesses go around their daily work unhindered, and that the wheel of the industry never stops. We are proud that the past ten years of Adriatic LNG have carried great benefits to the Republic of Italy and its people as it became an important part of Europe’s energy system. For us in Qatar, we are committed to work with all our clients around the world - to ensure the security of their energy supplies and the sustainability of their economic growth”.

Stefano Saglia, Board Member of the Italian Regulatory Authority for Energy, Network and Environment (ARERA) stated: “LNG plays an essential role in natural gas market, providing a contribution to the security of energy supplies, the diversification of import countries, as well as prices competition. The regulation developed by ARERA for the allocation of regasification capacity through auctions is considered a best practice in Europe. We are currently working on the consultation document concerning the tariff regulation of the regasification service. However, the exemption regime may be requested too. Italy’s ambition to become a gas hub in the energy transition is not a barrier to the growth in the use of renewable sources but, on the contrary, it is complementary”.

After 10 years characterized by excellent performances - the Adriatic LNG terminal is one of the most utilized regasification infrastructures in Europe, with an 81% utilization rate registered in 2018, which has reached 96% in the first eight months of 2019 - Adriatic LNG is now looking at future challenges: the terminal is preparing to welcome new generation carriers, Q-Flex, which can transport up to 217,000 cubic meters of LNG.

Tim Kelly, Managing Director of Adriatic LNG commented: “Our project has grown and been driven over the ten years by the human and professional energy of our people, the constant and constructive dialogue with the local community, and our active participation in Italy’s economic, social and cultural life. A path that has made us part of Italy’s economic and industrial landscape, where we are appreciated for a focus on safety and the environment, a reliable service, and technological and operational excellence and a focus on safety and the environment. A valuable legacy built up day by day with dedication and commitment, that today enables us to confidently rise up to the new challenges that await us in the future, in a market that is evolving continuously and becoming increasingly competitive”.

Maddalena De Luca, Prefect of Rovigo stated: “I am delighted to celebrate the 10th anniversary of Adriatic LNG, an event that celebrates the high value of Adriatic LNG in the economic and social development of Polesine territory through active participation in cultural, social, training, sporting events and projects concerning the fishing sector, the protection of the Po Delta Park, the promotion of the territory, innovation and the support of welfare policies”.