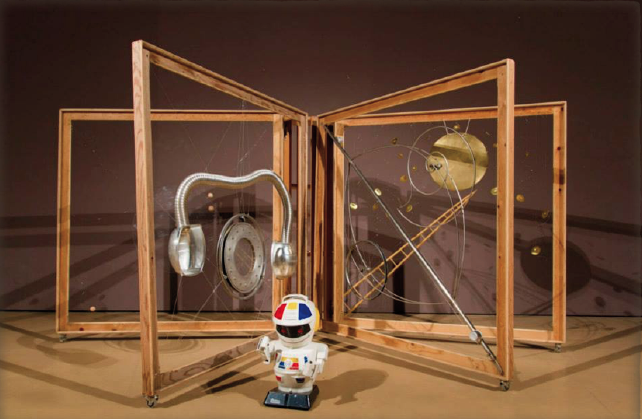 “A tutto gas! Macchine ritmiche per viaggi musicali” is the interactive exhibition realized by La Fenice Theatre of Venice, thanks to the support and collaboration of Adriatic LNG, the company managing the regasification terminal located off the Veneto coastline, which has always been committed to the promotion of educational and recreational initiatives addressed to young people.
The project has been created in order to bring children closer to the world of music and to stimulate their creativity and fantasy through games and sound experiments.

The exhibition consists of two different moments. The first phase will take place from October 17 to 23, 2016, when it will be set up in Rovigo at the Museo dei Grandi Fiumi. Then, from December 19 to 22, it will move to the city of Venice where it will be hosted in the La Fenice Theatre. The exhibition will be open for visits to the nursery and primary schools of Veneto region: children will be guided and assisted by educators from the educational department of Conservatorio F. Venezze of Rovigo, and A. Buzzolla of Adria, coordinated by La Fenice Theatre education&multimedia department. Visits and participation to educational labs are free and - upon request - open to all families and children living in Veneto.

After the great success of "Andante con gioco", this year too, La Fenice Theatre of Venice and Adriatic LNG have proposed an original project for kids called "A tutto gas! Macchine ritmiche per viaggi musicali", aimed at exploring, listening and composing music, using both body and mind.
The experimental path has been conceived in order to stimulate fantasy by rediscovering common objects used by the artists of Immaginante Laboratorio Museo Itinerante, as part of a project created by La Fenice Theatre education&multimedia department.

Cristiano Chiarot, Superintendent of La Fenice Theatre Foundation, says: “We strongly believe that kids are the future and we hope they will be our tomorrow's audience, that is why La Fenice education proposals aim at stimulating their artistic sensibility, fantasy and creativity. Realized thanks to the renewed support of Adriatic LNG, the interactive exhibition “A tutto Gas! Macchine ritmiche per viaggi musicali”, is an educational project which aims at making children discover the pleasure of music. We hope this proposal will follow the virtuous example of “Andante con gioco” the exhibition that last year had a great success in both Rovigo and Venice, with more than 35 school groups and a total of 3,200 children.”

Alfredo Balena, External Relations of Adriatic LNG explains: “Adriatic LNG is a strategic infrastructure recognized at both Italian and European level, but at the same time is a company locally committed and deeply rooted in Veneto region. Adriatic LNG actively participates in the social and economic development of Polesine through the valorization and promotion of cultural initiatives aimed at supporting the sustainable development of the territory in which the company has been operating for 7 years. After the extraordinary interest aroused last year by the sound exhibition “Andante con Gioco”, Adriatic LNG has enthusiastically renewed its support in the education of kids through a partnership bound with La Fenice Theatre, a prestigious institution which has always been at the top of European and international musical landscape. Through this innovative project a cultural foundation and a private company reinforce cooperation in order to bring young people closer to music.”